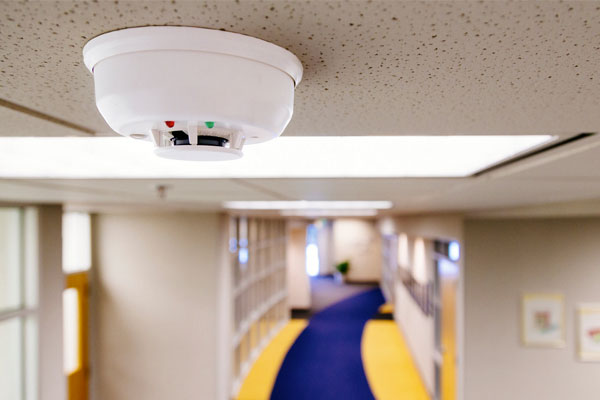 Are Smoke Detectors the Same Throughout a Building?

When I was college living in the dorms, someone was always burning something in the microwave. That item was usually popcorn. Burnt popcorn caused the fire alarm to go off and everyone to evacuate the building. This always happened at the worst time when it was raining, in the middle of the night, during finals week etc. Then whoever set off the alarm got dirty looks from everyone. But, there was absolutely nothing they could do once the smoke hit the detector.

Unlike detectors in homes, people can’t silence smoke detectors in offices, hospitals, and apartment buildings by fanning the smoke away from the detector. Smoke detectors either send out a local or widespread signal once smoke is present. The type of facility and the device’s location determines what kind of detector’s installed.

Office spaces, apartment building hallways, and hospitals supervise smoke detectors connected to the fire alarm panel. When it detects smoke, a signal transmits to the fire alarm panel. This sets off horns and alerts the building’s occupants. When burnt popcorn occurs in a home, the source of the alarm comes from a single station detector. If smoke spreads into the hallway of a dorm or apartment then a supervised smoke detector in the hallway will activate the horns throughout the building.

Depending on where you’re cooking your popcorn there’s either a supervised or single station smoke detector in close vicinity. If you’re in an office, hospital, or dorm the consequences of burning popcorn will be very embarrassing. My suggestion is to keep a close watch on that bag of movie theatre butter popcorn regardless of where you’re cooking it. After all, no one enjoys burnt popcorn.

previousFIRE PROTECTION FOR THE DEAF AND HARD-OF-HEARING COMMUNITY
next